Four Types of Board Members – And Why You Should Recruit Each

We believe in libraries. We get libraries. Library Strategies Consulting Group often partners with Friends and Foundations on their strategic planning processes. We are the only consulting group in the country based inside of a library organization. We understand library missions because they are our mission. We also understand the challenges libraries and library organizations face. Library Strategies brings passion and library-focused knowledge and experience and tailors it to achieve your goals. November 16, 2017/ 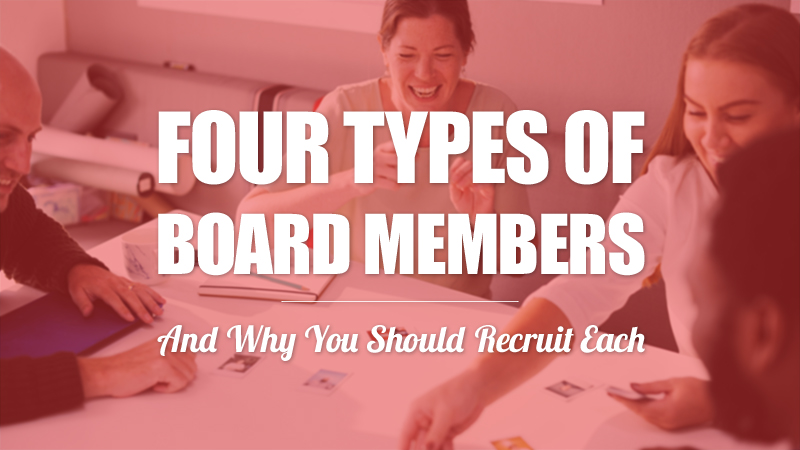 When a Friends or Foundation board looks for new directors, it can be tempting to prioritize deep pockets over all else. It’s an understandable impulse. After all, fundraising is a major part of our “raison d’être.” Moreover, as we’ve said before, you should strive for a 100 percent Board donor rate.

Even so, board donations alone will never sustain your organization. As you vet new directors, consider other assets candidates could bring to the table to further your mission. Don’t overlook potential directors who fit one of these four profiles.

1) Curtain Raisers. No matter how well-networked you are, odds are that you yourself do not know everyone in the community who might be receptive to aiding your organization in some big way. Whether you are seeking more large donations, new leaders to fill upcoming vacancies – or, more likely still, some combination – turn to your board’s Curtain Raisers.

Put simply, Curtain Raisers facilitate new connections; these adroit networkers are your best bet for reaching as-yet-untapped contributors. Studies have conclusively shown that in-person, one-on-one asks from a passionate personal connection are the best way to increase your fundraising and recruitment reach.

You can get the most out of your Curtain Raisers by doing two things. First, actively identify areas in which they can help. (“We are $5k short of our campaign goal. Do you know anyone who might bridge that gap for us?” “Our treasurer’s term is up next year, and we don’t have a finance person on deck to replace her. Do you know anyone?”) Second, as problems or opportunities arise, be receptive to their referrals and encourage them to reach out to strong prospects (“I might know someone who can help…”)

If your Friends group or Foundation hosts special events of any kind – be they ticketed galas, free library programs, or one-off parties to celebrate a major milestone of some kind – look to your Friend Raisers. They will drum up attendants who might not otherwise have heard of your programs, and – just as critically – stoke enthusiasm among those who are within your sphere but may not have turned out otherwise.

Attending an in-library author reading, annual gala, or even a well-orchestrated used book sale represents a minimal commitment on the part of those approached. However, if you leave a positive and lasting impression, you may sow the seeds for a donation (or time commitment) at a later date.

3) Barn Raisers. Amish communities across America maintain the age-old tradition of “barn raising,” where families come together and pool their time and tools to erect a barn in the span of a day. You probably don’t have much use for a barn, but the basic principles hold true: little can get done without “elbow grease,” but many hands make for light work.

Barn Raisers are crucial to Friends and Foundations, particularly those with no paid staff to handle the “brunt” of on-the-ground duties. Turning to the examples we cited earlier, no book sale will get off the ground without organizers willing to sort books and coordinate volunteer shifts, and no author event can occur without a point person to oversee logistics.

If your board of directors is light on Barn Raisers, reconsider your nomination criteria with this need in mind. The archetypal Friend Raiser may have the influence to drive others to your functions, and Curtain Raisers the affluence to drive large donations based on their own charitable example. But, in addition to “influence and affluence,” consider work ethic and leadership interest when seeking and vetting candidates.

4) Consciousness Raisers. Ultimately, all your directors’ collective efforts are intended to better the library, and no public library can get by on private funding alone. For this reason – though this one may not roll off the tongue like the others – Consciousness Raisers are arguably the most valuable psychographic profile of all.

Consciousness Raisers bring the knowledge and gumption required to lobby for the library’s continued public funding in public forums, and spearhead grassroots advocacy efforts within your community.

Dividends may not be immediate, but depending on a given director’s skill set, an hour spent in candid conversation at the office of your county commissioner might be exponentially more valuable to your cause than an hour spent directly soliciting private donations.

Remember, advocacy is essential everywhere. If you live in a small community or represent a budding nonprofit, you may be tempted to concentrate overmuch on recruiting Barn Raisers and Friend Raisers, and give Consciousness Raisers short shrift. Don’t! We know of many instances where a corps of activism-minded directors made a major impact on a small community’s library services.

(Let’s look at a case in point. Back in 2012, the city of Cambridge, Minnesota – population 8,000 – faced a library budget cut requiring a major reduction in hours and the downsizing of six part-time positions. Thanks largely to tireless advocacy fronted by two members of the Friends of the Cambridge Public Library, the county’s board of commissioners reversed these deep cuts the very next year!)

Naturally, these psychographic profiles are not “mutually exclusive.” In practice, for instance, a Consciousness Raiser with a knack for public advocacy might also have a grassroots network they can tap as Barn Raisers or Friend Raisers. However, conceptualizing your leaders’ (and prospective leaders’) characteristics in this way will help ensure that you maintain a balanced board of directors.