The Law of 80/20 and Capital Campaigns

We believe in libraries. We get libraries. Library Strategies Consulting Group often partners with Friends and Foundations on their strategic planning processes. We are the only consulting group in the country based inside of a library organization. We understand library missions because they are our mission. We also understand the challenges libraries and library organizations face. Library Strategies brings passion and library-focused knowledge and experience and tailors it to achieve your goals. April 10, 2017/ 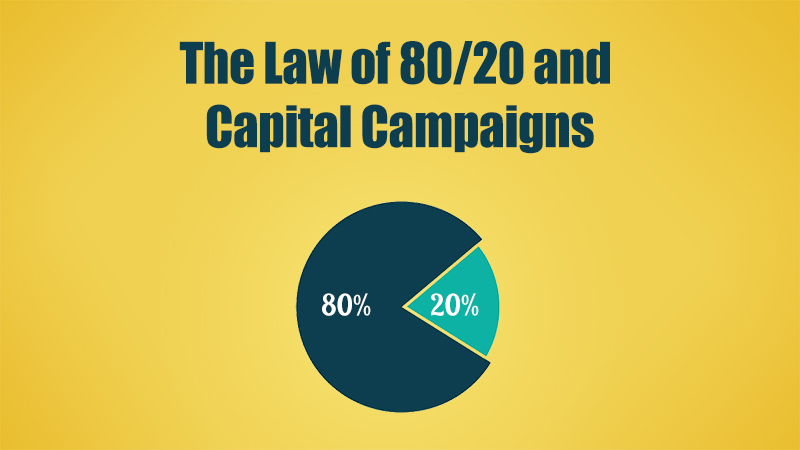 The Pareto Principle, or the law of 80/20, seems to apply to many things in our lives – from Pareto’s original observation of wealth distribution to a wide range of phenomenon revealing that 80% of effects come from 20% of causes.

This principle certainly applies to capital campaigns. In other words, you can expect to raise 80% of your campaign goal from roughly 20% of your donors. In fact, with today’s widening wealth gap, those numbers are shifting closer to 90% of your goal coming from just 10% your campaign donors.

What does this mean for your fundraising campaign? It means to be successful, you will need to focus your efforts on securing lead and major gifts from a small number of people. You cannot raise $1 million by expecting 1,000 people to give $1,000.  We often hear of libraries who want to attempt a campaign like this. It just won’t work. Most people will give far less or nothing at all. And if the expectation is to give only $1,000, many will only give that amount and not more, which means you’ll fall far short of your goal after a great deal of work to get the attention of those 1,000 donors.

Instead, a capital campaign should plan to identify lead and major gifts according to a giving pyramid based on the Pareto Principle. For instance, a gift chart for a $2 million campaign would look something like this: Once you’ve secured 80% of your goal from your major donors, only then should you announce your campaign and solicit smaller gifts from the general public. By then your goal will be within reach and your entire community can anticipate playing a part in achieving a successful library campaign!