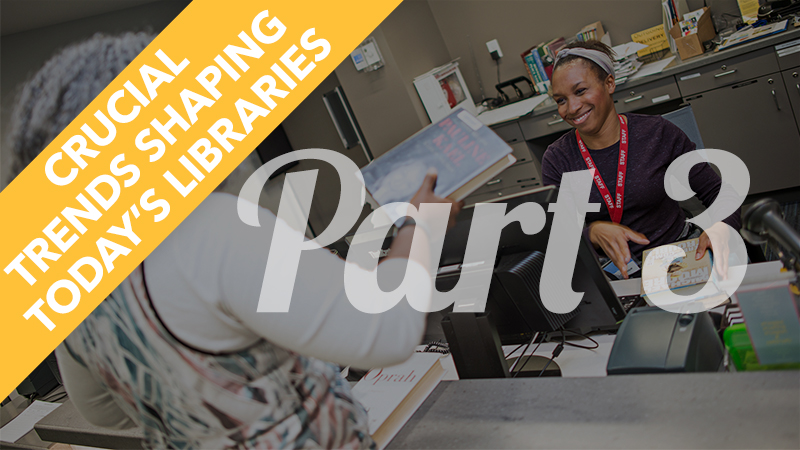 (Read our Part 1 of our Library Trends Series!)

(Read our Part 2 of our Library Trends Series!)

Anyone who frequents libraries knows that physical collections are not static – items are added, and others weeded, all the time. Less obvious, but no less important, is the fact that library service is also slowly but steadily evolving. Let’s take a look at some key trends shaping the future of library service and outreach:

Libraries boast a long, proud history of serving New Americans. In the nineteenth century, philanthropist Andrew Carnegie – himself an emigrant from Scotland – praised the public library as the “place for immigrant self-education, enlightenment, and the study of democracy and English.”

That need is greater now than ever before. According to the Census Bureau, 13 percent of all residents (over 40 million people) were not born here. Moreover, according to recent IMLS statistics, nearly 55 percent of that population visits their local library at least once a week.

Libraries are not shirking this responsibility, with many investing in increasingly popular services tailored to the immigrant community. English-as-a-second language (ESL or ESOL) classes are doubtless top of mind, but represent just the tip of the proverbial iceberg. Many also offer classes and seminars on the naturalization process, including test prep. Job search assistance, including one-on-one help sessions, is equally valuable.

(For a great many New Americans, the library is also their primary – and maybe even their sole – means of acquiring materials in their native language. In addition to educational resources, like language-to-language dictionaries and newspapers, this is true for books, DVDs, and other materials with a more recreational bent.)

For more examples on how libraries today are helping the immigrant communities in their midst, check out ALA’s compact Library Services for Immigrants: A Report on Current Practices.

Libraries, together with institutions of higher learning, are finding themselves at the forefront of the growing ‘gamification’ movement.

Definitions for this word are as many and varied as the places you will see it in use. At its heart, however, the intent of gamification is to inject classic elements of gameplay into non-recreational tasks. Hallmarks include the assignment of missions or objectives, a points-based rewards system, and elements of peer collaboration and competition.

Tutorials and orientations offer the best examples of gamification in practice. Dartmouth College and Oregon State University Library are among the early adopters who have seen great success with SCVNGR (SCaVeNGeR), a game-based geolocation platform. Applications like this allow librarians to build challenges that familiarize new students with the library’s collection, service offerings, and online interfaces – through a mix of scavenger hunts, time-tested instructional modules, and more. Compared against more traditional orientation modes at these same institutions, tech-enabled initiatives like this see high participation rates. However, they are somewhat sophisticated, and take time to set up and maintain.

Other gamification practices are less involved. Mobile apps like Foursquare and Swarm incentivize patrons to visit and “check in” regularly at their local library. In-game prizes, such as ‘badges’ or honorary ‘mayorships,’ may drive traffic all on their own. Taking a page out of the restaurant and coffeehouse playbook, enterprising libraries can also offer tangible rewards (such as a t-shirt or Friends of the Library membership) to frequent visitors, and “tag” their location as a vendor of certain services (think, “Free WiFi”) to attract young non-users.

Last but not least, gamification is an excellent companion to summer reading initiatives – most of which already contain overt gameplay and competitive elements. A standout example is “Play at AADL,” a fun, retooled summer program of the Ann Arbor District Library.

Speaking of attracting young non-users, so-called “pop-up libraries” are another relatively new and increasingly popular phenomenon worth exploring. Pop-up libraries are quite possibly the most effective outreach tool to come along since the bookmobile.

If gamification sounds beyond your technical means, you will find pop-up libraries to be refreshingly simple, as well. All that is required for success is a willing community partner, a passionate and well-spoken staffer, books, and equipment to transport, display, and loan them.

Across the country, these mobile displays “pop up” in schools (particularly those lacking media centers), community centers, parks, museums, and other high-traffic locations.

While these pop-up libraries are unlikely to boost your circulation counts in any appreciable way, community engagement of this sort can reap major long-term dividends. That is why it is so essential to staff any pop-up with librarian(s) who are both passionate about the library’s value proposition and versed in its key messages. Ideally, this staffer will come equipped to sign non-users up for library cards – as well as brochures or fliers to plug library services, classes, and other offerings.

Some libraries have taken it a step further. Houston Public Library, for instance, maintains a pop-up library (actually a tent) that is reservable, and comes decked out with iPads linked to the library’s OPAC.

Interested in starting your own pop-up program? Public Libraries Online and School Library Journal both offer concise articles to get you up to speed.

In 2015, the Salt Lake City Public Library made waves within the library community by announcing its intention to explore the possibility of extending hours of operations to 24/7. Ultimately, due to financial and safety concerns, that ambitious plan never come to fruition in its original form.

However, even the pilot project’s most stalwart opponents conceded that the idea made sense based strictly on recent usage patterns. Now more than ever, patrons have need of the public library’s resources outside of the 9 a.m.-5 p.m. or 10 a.m.-8 p.m. window during which the brick-and-mortar facility is open and staffed.

While a smattering of academic libraries have seen success with 24/7 hours of operation, public libraries are extending their after-hours reach in more creative ways.

WiFi access is the example cited most frequently in field literature. This is hardly surprising; much research and work is done online, and for at least some patrons, the library continues to be their only reliable internet access point.

Acknowledging this fact, the 11-branch Saint Clair County (MI) Library System recently made the decision to keep its building lobbies open continuously (accessible after hours by swiping your library card). Patrons are encouraged to bring their laptops and tap into WiFi any time. Many libraries across the country have followed suit. In a variation on this practice, other libraries have invested in modem boosters to enable patrons to access high-speed internet at all hours from their car in the parking lot.

In order to provide round-the-clock research assistance, other libraries are entering into special consortia with peer institutions across the country. Users of the Nashville Public Library, the Free Library of Philadelphia, and many other systems can get questions answered via online chat at any time of day or night.

If the above strategies sound beyond your means, make it a point to promote databases, e-content, and learning tools (such as Lynda.com) that patrons have access to from home.

Have you seen other Library Trends we should know about? If so, give us a shout!