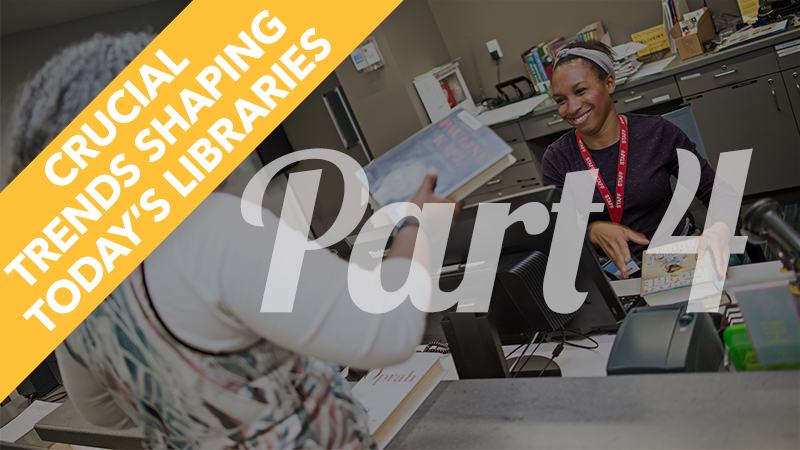 (Read our Part 1 of our Library Trends Series!)

(Read our Part 2 of our Library Trends Series!)

(Read our Part 3 of our Library Trends Series!)

Whether you are conducting strategic planning, embarking on a capital campaign, or on the hunt for a new library executive with credentials perfectly suited to the role, it is imperative to remember that these activities do not take place in a vacuum. On the contrary, success in any of the above requires a firm understanding of the larger, ever-changing library environment.

While mission and vision statements differ from library to library, nearly all place an emphasis on inclusiveness and creativity. Fandom participation is a high-profile trend – inside of libraries and out – that nicely meshes the two.

A fandom is a self-identified community which comes together around the shared love of a niche special interest. Everything from science fiction properties like Star Trek and Star Wars, to board games, to Japanese anime boasts an active fandom.

Most pop culture analysts and sociologists agree that fandom extends beyond passive media consumption to something participatory. In fact, in a way, fandom is a cousin concept to makerspaces, because fans show their appreciation for their shared interest by making it their own. Fanfiction, character art, blog and vlogger reviews, and cosplay (custom making customs to dress up as favorite characters) are prime examples.

However, conventions (“cons” in fan lingo) are the most visible manifestation of fandoms. The multi-genre San Diego Comic Con, which draws nearly 180,000 attendees each summer, is the gold standard. Only a fraction of other for-profit cons boast even half that number, but the concept is popular everywhere.

Because conventions celebrate creativity and community connectedness – and provide a welcoming, inclusive space to persons who may feel out of place or even isolated in other social environments – libraries are embracing the concept. Successful, replicable, scalable models include recent cons hosted by the Boise Public Library, La Crosse (WI) Public Library, and Chesterfield County (VA) Public Library.

As of 2016, young adults aged 18-34 are more likely to live with their parents than with a spouse or significant other (32.1% vs. 31.6%). This statistic illustrates a broader trend: Most Americans today readily accept the existence of a period of development between adolescence and “full adulthood” (traditionally marked by life milestones such as marriage, home ownership, and children). Psychologists coined a word for this phase back in 2000: Emerging Adulthood.

Where library service is concerned, Emerging Adults have a set of needs and wants more evolved and almost completely separate from those of teen/YA audiences.

A handful of trendsetting library systems – New York City, Los Angeles, Tucson, Pittsburg, Bozeman, and Birmingham among them – have had instant success in recent years with “Adulting 101” programs. As the tongue-in-check name suggests, these are series that teach young adults important life skills: everything from balancing a check book, to folding fitted sheets, to searching for insurers or real estate agents.

South Bend, Oregon, of all places, may boast the most cited and replicated program model. Earlier this year, South Bend Public Library’s Adulting 101 class even earned a shout-out on ABC’s popular morning talk show Live with Kelly and Ryan.

Tailored education offerings are only half the equation. Millennials (today’s Emerging Adults) place high value on social interactions. Indian Prairie Public Library in Illinois is prominent among those offering a wide-ranging programming series specially tailored for Emerging Adults – in their case, titled “LibSocial for 20 & 30-Somethings.” Others, notably Sacramento Public Library and Mid-Columbia Libraries (WA), are partnering with local breweries and tap rooms to co-host pub trivia.

On the other side of the spectrum, did you know that every day in the United States, nearly 10,000 people turn 65? It’s true – and this will remain the case for at least another decade, as more and more Baby Boomers reach that traditional retirement threshold. This major demographic shift is one that public libraries cannot afford to ignore.

Fortunately, on the whole, residents aged 55+ tend to be strong users of their local library’s core services. They are also disproportionally represented among patrons who attend library programs and events. Despite that strong starting position, however, we’re in no position to rest on our laurels.

Factor 1: Geographically, Jacksonville is the largest municipality in America. Factor 2: On average, when compared against other residents, seniors are less able and inclined to travel downtown (or to some other central location) to attend special events. Library staff eventually made this important connection, and repositioned JPL50+ so that its senior-oriented activities are evenly distributed throughout more of its 20 branches.

Many libraries take this a step further, not only “decentralizing” senior-oriented programs and services, but taking them beyond the brick-and-mortar walls of the library altogether. In large and well-funded library systems, it is not unusual to see outreach librarians focused exclusively on bringing the library to seniors – in retirement homes, senior centers, churches, and so on.

On the whole, life has never been busier. Americans have more demands on their time, and hold leisure time at a higher premium, than ever before. This new reality brings with it interesting repercussions for our reading habits.

For starters, short stories, novellas, and serialized storytelling – formats long considered unsalable by many publishers – are seeing a resurgence.

This is particularly true in the digital sphere, where Amazon’s new Kindle Singles and Amazon Rapids products are the bellwethers to watch. Kindle Singles (the name is cribbed from the term “music single”) is an e-book platform that allows readers to browse thousands of novella-length stories, essays, and long-form journalism pieces from Amazon’s extensive repertoire. Amazon Rapids, which is geared towards emerging readers aged 5-12, offers hundreds of original short stories which kids can generally complete in less than ten minutes. Some are only 500 to 1,000 words in length.

Meanwhile, in the print arena, Little Brown is striking gold with novellas in its Book Shots series, where each entry is a mere 150 pages in length.

This trend has obvious collection development implications for libraries. In short, as patrons look to optimize whatever spare time they can find to read, reassess “short reading” resources as an acquisition priority.

Interestingly, forward-thinking libraries are also harnessing “short reading” as a tonic in the perennial battle against aliteracy (apathy towards reading). Chicago is perhaps the gold standard here. The Chicago Public Library is currently partnering with the Chicago Transit Authority on CPL on CTA, a special platform that links area commuters to e-books, Chicago blogs, and other media easy to consume in short bursts while on public transportation.

Have you seen other Library Trends we should know about? If so, give us a shout!